A qualified deck professional will be glad to inspect your existing deck to determine if you can replace the top layer but keep your existing sub-structure for a reduced cost in replacing your deck.

If you have an existing deck that is badly in need of replacement, there’s a chance you don’t have to scrap the entire thing. If the foundation is fit, you may be able to “re-deck” it which means utilizing the existing under structure but replacing the decking boards, railing and stairs or thing top part of the structure.

For these Hilliard, Ohio homeowners, this is exactly what we did. The existing deck was originally multi leveled and contained a hot tub. The original deck had a hot tub which took up a considerable amount of the usable living space. The owners wanted to remove the hot tub which had previously necessitated a minor step-up that further restricted the usable living space. In removing the hot tub, we were able to level out the deck which increased the usable living space by 100 more feet. How do you know if your existing deck under structure is sound enough to support re-decking? Call a qualified, reputable decking company for an estimate. They will be able to evaluate your deck to see if it is a candidate for re-decking.

The boards for the deck were run on a diagonal . We also used parting boards in the middle of this uniquely shaped deck. This is a design element within decking that not only looks great it also eliminates having to splice decking boards together. Hidden fasteners were used throughout so there would be no signs of screws anywhere. 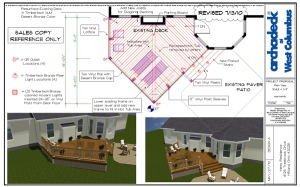 The addition of the outdoor lighting made a dramatic impact with the homeowner on this deck. All the stair risers have recessed lighting for safety and for a tranquil, soothing effect in the evenings. We also used lights on the posts. The post lights were done out of low voltage TimberTech accent lights, these lights give you capability of hiding the wiring inside the posts themselves. Larger rail posts were chosen by the homeowner to compliment the lighting. By using a 6×6 post as opposed to the normal 4×4 used on decks such as this, we were able to accentuate the post lights so they weren’t as snug.

The colors on this deck harmonized together beautifully. It was important to the customer to use contrasting colors so we used desert bronze by TimberTech on the rail cap  and used bronze colored riser lights that really brought out the color of the desert bronze decking.

This particular job came together beautifully. The worry-free, low-maintenance materials, the deck lighting and all the details made a big impact on the finished project. If a new deck is in your sights, or you are considering re-decking your existing deck give Archadeck of Columbus a call. From the planning stages all the way to the finished project, we are there to make your visions a reality.

Give us a call for a free consultation or to discuss your next outdoor project. (740) 879 – 3730
westcolumbus@archadeck.net.

We look forward to talking to you.

I began my association with Archadeck in 2001 when I was working for a subcontractor that Archadeck of Columbus was employing for patio installations. I had been working in the Landscape/Hardscape industry for quite a few years at the time and immediately noticed a difference in how Archadeck operated in comparison with other deck companies that we worked with. Over the years of working with Archadeck on numerous projects, large and small, I came to realize the importance of what they were selling; beautiful designs, top-notch craftsmanship and a world class customer experience. This is what drove me to start working for Archadeck in January of 2011 and eventually buying the company in 2016. My wife, Amber, and my son, Logan, could not be happier to be a part of such a wonderful organization. We look forward to the future as we build the outdoor living environments our customers dream of with the “world class” service they deserve! View all posts by archadeckofcolumbus