Archadeck of Columbus is humbled and proud to have been awarded the Angie’s List Super Service Award for 2013, and the 2013 Consumers Choice Award in Columbus for deck and patio builder!

Nothing makes us more proud than to win an award that is based solely on the opinion of homeowners right here in the Columbus market. Each of these esteemed awards is a direct reflection of the relationships we forge with our customers and the quality of work we strive to achieve. We have been in business for over 11 years. Along the way we’ve had the opportunity to work with Columbus homeowners on projects from decks to porches, patios, pergolas and many other outdoor living structures. We are committed to delivering exceptional service. All these factors go into the pride that we feel in receipt of this award because it is based on the opinion we value the most – that of our customers.

The Angie’s List Super Service Award honors excellence among service providers who maintain superior service ratings and reviews on Angie’s List throughout the past year. Certain criteria must be met in order to be considered for this award. This criteria includes receiving a minimum number of unsolicited reports from those members. The selected companies must also maintain an “A” average on these reports and not be in poor standing with the Better Business Bureau. Less than 5% of the companies on Angie’s List receive the Super Service Award, so we are honored that our customers have elected us for an eighth consecutive year.

Being considered for the Consumer’s Choice Award  is a rigorous process as well. A company must first be nominated by at least two different Columbus area homeowners. Only the most nominated companies in each category will populate the final ballots. Voting is commissioned to Survey Sampling International® (SSI), a global leader in consumer research. The consumers chosen to vote in the survey are part of a registered panel population in your community. This consists of approximately 5,000 people who take the SSI survey to vote for the favorite businesses in each community. The final results are then tallied by an ethical review process done by a regulatory law firm that specializes in regulatory assessments – (Macmurray Petersen & Shuster). The ethical review team reviews the business before they decide upon the recipient of  the award. Nominations can be submitted by anyone and the award winners are announced throughout the year. Winners are announced each year in December. The manner in choosing the winner for this award is much like the stringent practices seen in movie and music award shows. 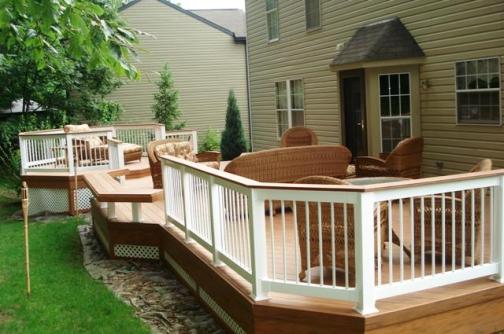 “Being nominated and chosen for these awards is a testament to the way we do business and the passion that goes into every project. We want each of our clients to get the outdoor space they have always wanted. We treat each client like they are our one-and-only client. These awards reflect the consistency we show in providing the best for our clients.”

If you are searching for the right company in the Columbus area to bring your outdoor living dreams to life, contact Archadeck of Columbus. We can assist you in choosing the right structure to match your personal taste and desired function. From there we will provide a detailed rendering of your anticipated space, and upon your approval begin construction of your backyard masterpiece. Call us today for a free consultation (740) 879 – 3730
westcolumbus@archadeck.net

You can view photos of our completed outdoor structures by visiting our deck galleries and our patio and hardscape galleries located on our website.

If you are among the many who count themselves as a satisfied customer of Archadeck of Columbus, visit Angie’s List or the Consumer’s Choice website to tell them about your experience!

I began my association with Archadeck in 2001 when I was working for a subcontractor that Archadeck of Columbus was employing for patio installations. I had been working in the Landscape/Hardscape industry for quite a few years at the time and immediately noticed a difference in how Archadeck operated in comparison with other deck companies that we worked with. Over the years of working with Archadeck on numerous projects, large and small, I came to realize the importance of what they were selling; beautiful designs, top-notch craftsmanship and a world class customer experience. This is what drove me to start working for Archadeck in January of 2011 and eventually buying the company in 2016. My wife, Amber, and my son, Logan, could not be happier to be a part of such a wonderful organization. We look forward to the future as we build the outdoor living environments our customers dream of with the “world class” service they deserve! View all posts by archadeckofcolumbus